Antonio Pauciulo: “I see myself as a communication channel with the universe” 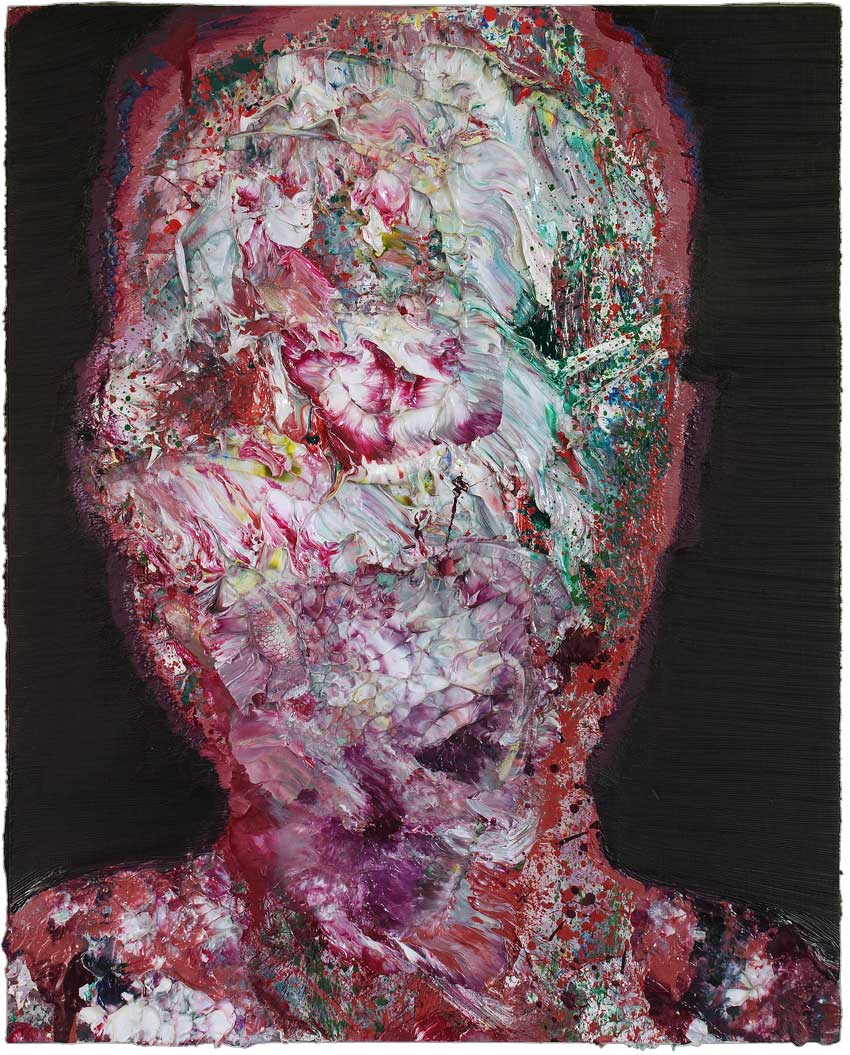 More and more artists are coming to Berlin. But many artists also leave the city. Antonio Pauciulo is one of them, a professional painter from Italy. He studied psychology and philosophy. 14 years ago he moved to Berlin - Antonio was part of the First Berlin Art Week 2014 and the Gallery Weekend, now he left Berlin and moved to Leipzig. We talked to him about his step to of coming to Berlin, his life as an artist and Leipzig as a new metropole for the international art scene.

CCB Magazin: Hi Antonio, you currently live in Leipzig. Do you like the city?

Antonio: Oh yes, it’s a wonderful and interesting place. Leipzig is the largest city in the federal state of Saxony, Germany with a population over 500,000 inhabitants. And it's a good place for artists.

CCB Magazin:You are a painter. You came from Italy to Berlin 14 years ago and now you moved to Leipzig. Why?

Antonio:I lived and worked in a loft in Berlin-Wedding for ten years and my art was existentially linked to this space. In 2014, however, I lost this studio, which came to me as quite a shock. It was during a time where I had begun creating a new series of paintings (array00), which represented a jump in my career and was really important to me. I was excited to continue, but Berlin had become expensive and it was difficult to find the studio I needed. Furthermore, many of the things I loved in Berlin were gone and I dreamed about starting something new. So I moved to Leipzig, where unused spaces in former industrial facilities were still available – and affordable – and I found a beautiful studio in an ancient piano factory, where I could concentrate on my work.

CCB Magazin:Was it your first stay in Leipzig?

Antonio:Yes, it was my first trip to Leipzig.

The main reason for moving to Berlin was my attraction to romantic and idealistic ideas. I was sure to find the key to my art in Berlin

CCB Magazin:Why did you move to Berlin before? And what was your first impression of Berlin?

Antonio:The main reason for moving was my attraction to romantic and idealistic ideas; Berlin, with its raw openness, was the perfect place for developing my painting in a way that seemed impossible to me in Rome. There I felt little space for developing an open vision, because of the huge presence of a specific tradition. The possibility of moving to Berlin came in form of a grant of the Leonardo da Vinci program. Although, I felt I was always in transit, I was strongly motivated to stay in Berlin since I was sure to find the key to my art there. In the early 2000s it was easy to get a space for working or having exhibitions; this freedom excited me. I was part of the art scene in Berlin-Wedding, where a great deal of artists were managing gallery-studios by themselves: for example the curator, the craftsman and finally even the gallerist. It was a mix of improvisation and passion: a dream, a beautiful feeling of independence, something special and alive. 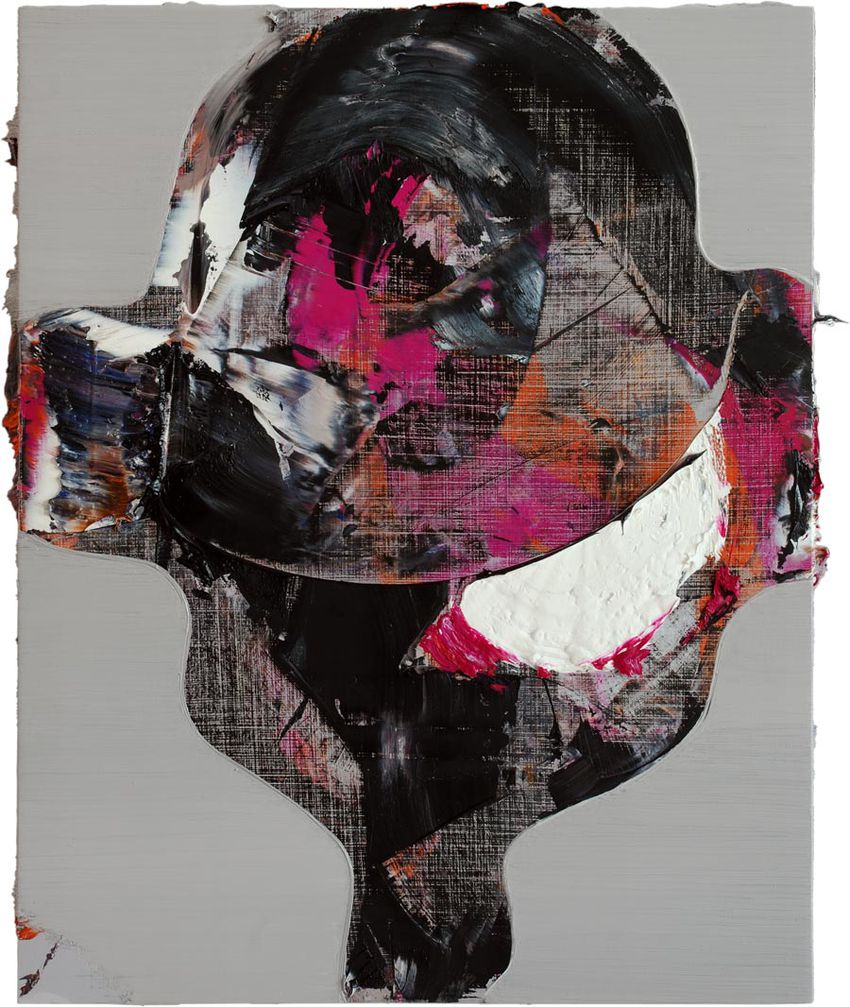 CCB Magazin:What is your impression of Berlin today?

Antonio:Today this kind of experience has become seldom or even nearly impossible.

Antonio:The mood of the time has changed quickly and is still changing. Today we encounter different fears and other desires. Berlin Art Week 2014 for example was an experience I will never forget: I organized the exhibition “memento project" on Potsdamer Straße, which showed four different positions, ranging from minimalist abstraction to traditional figurative painting. What especially impressed me was that each artist had their own passionate audience. It was a beautiful example of the diversity and openness of the Berlin art viewer.

Berlin is multifaceted and fashionable. Its trends are changing quickly like the wind over the city. Leipzig is a city of workers, a reliable ground with deeply rooted traditions

CCB Magazin:If you draw a comparison between Berlin and Leipzig, what is the difference today?

Antonio:Berlin is multifaceted and fashionable. Its trends are changing quickly like the wind over the city. Leipzig, on the other hand is a city of workers, a reliable ground with deeply rooted traditions. But of course, those two images are partial. Considering only the cliches, since they are both very complex cities having their own contradictions and diversity. I'm happy about the move to Leipzig, because my paintings are developing very well and there are many possibilities of meeting and collaborating with international artists. 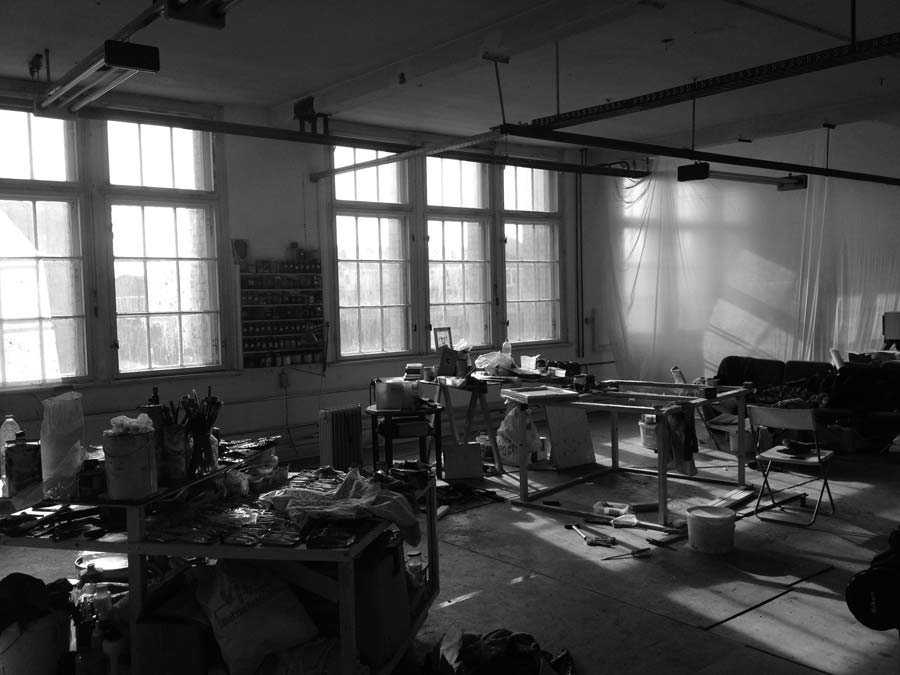 CCB Magazin:But Leipzig is becoming more and more attractive. Artists moved to town, investors, too. Is Leipzig changing to a dynamic investment market?

Antonio:If you are focusing on the real estate market, yes. But the art market in Leipzig is specific and small. Indeed, only a few artists are able to find their market and visibility here. But displacement for artists is an issue, too; groups like „Prisma – Interventionistische Linke“ are fighting against displacement, which is one of the consequences of the liberal market. This situation will generally remain unchanged unless political decision will be made to change some things.

CCB Magazin:What can artists do, to change the situation?

Antonio:In order to fight against displacement artists could found associations for buying the real estate. Regarding this, the ExRotaprint in Berlin-Wedding is a beautiful example. It would be a good signal, if Berlin had changed like this in the last years. But Berlin took another direction - Berlin has changed a lot in its entirety during last years, this is why I left the city. In majority, young artists now no longer seem to be attracted by the idea of being independent. And generally the artist's role is becoming more and more similar to other professions. 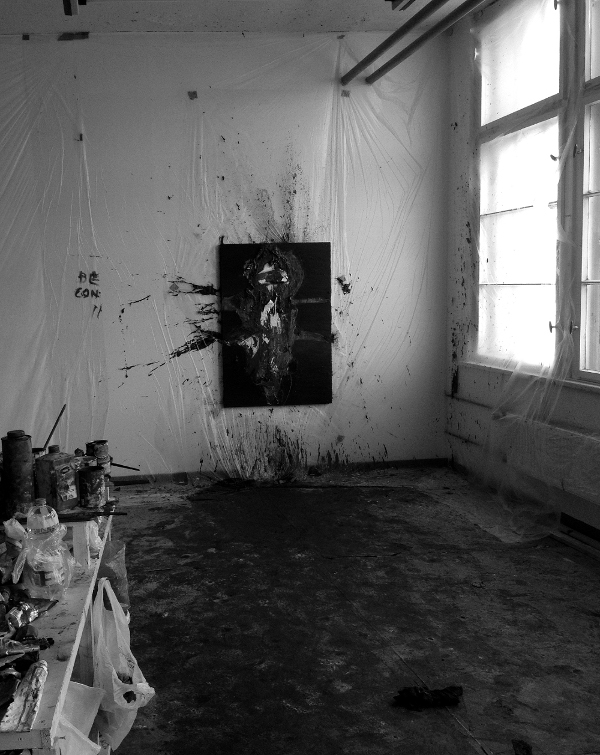 CCB Magazin:But could this not be a chance to implement thoughts and ideas from art in other professions? Or is it the end of art because of its commercialization? Onika Simon from Spokehub, for example, brings artists and big companies together. They also think that big companies can learn from designers and artists. What's your opinion about it?

Antonio:Certainly, big companies and artists can learn from each other. But concerning the creation of an artwork, I see a moral limit: should an artist have similar objectives as a businessman? This is an open question about the mission of the artist and each one must find an own answer. It is very unlikely that a businessman will start something from which he is not expecting financial success; an artist, on the other hand, could and should have the freedom to work without commercial goals in mind. Finally, the commercialization of art does not mean the end of art. The artists, who work on commercial products, will do so and sell only a product. But this doesn't prevent other artists from continuing to pursue their vision. Both sides coexist.

My ambition is to provoke an encounter between a person and a painting. No crowd around. If this meeting does happen to take place, the person as well as the painting will change

CCB Magazin:Do you have a vision? Or a central aim? What do you want to achieve with your work?

Antonio:My ambition is to provoke an encounter between a person and a painting. No crowd around. I'm dreaming of an exhibition made up of closed cabins that contain only one painting for encouraging this dialogue. If this meeting happens to take place, the person as well as the painting will change. I was lucky enough to live this experience several times, which changed my life. Maybe it's about a kind of “biology of the culture“: when two elements fit together perfectly, a third element appears that is new.

Antonio:The study of Philosophy, especially, had a great impact on my thinking and so obviously affected my painting. To give a concrete example, some ideas of Wittgenstein helped me understand that an artwork is a piece of reality and not its representation. My attendance at the Academy in Rome gave me the opportunity to meet two friends and colleagues with whom I founded an art group (grupposangiorgio 1994-1999). We were interested in a multisensorial approach to art and we realized several collective works following the need to create an authentic, independent art. Those experimental artworks were made of mixed media like painting, projection, olfactory stimulation, installation and performance. It was a way for connecting the audience, the artwork and the artists based on a horizontal communication without preconceived barriers.

CCB Magazin:Your work looks very organic, as if one can look in the inner circle of people, as if one can see their wounds and veins in their bodies. Does this have a special meaning?

Antonio:I am very attracted to the language of the human body and its materiality. To me, the body carries its own specific knowledge, made up of layers of culture glued on the powerful animal core. In my process of painting I search to dive through those layers. Concerning my conception of painting, I am following two main lines which correspond to different degrees of human being (Dasein): presence/absence. In some cases I tend to fade and to expand the figure through a process of disintegration of the forms. In another, on the contrary, I define solidly the figure, by means of keen shapes articulated in blocks.

CCB Magazin:Is your work a mirror of your inner self?

Antonio:The self-portrait has always been my main subject, but my paintings are not simply a mirror of myself. To me it is an emotional-physical starting point, a rich complex of individual and universal elements; it is the possibility to discover, starting from the provisional and fragile individual, something unexpected that transcends my conscious self. 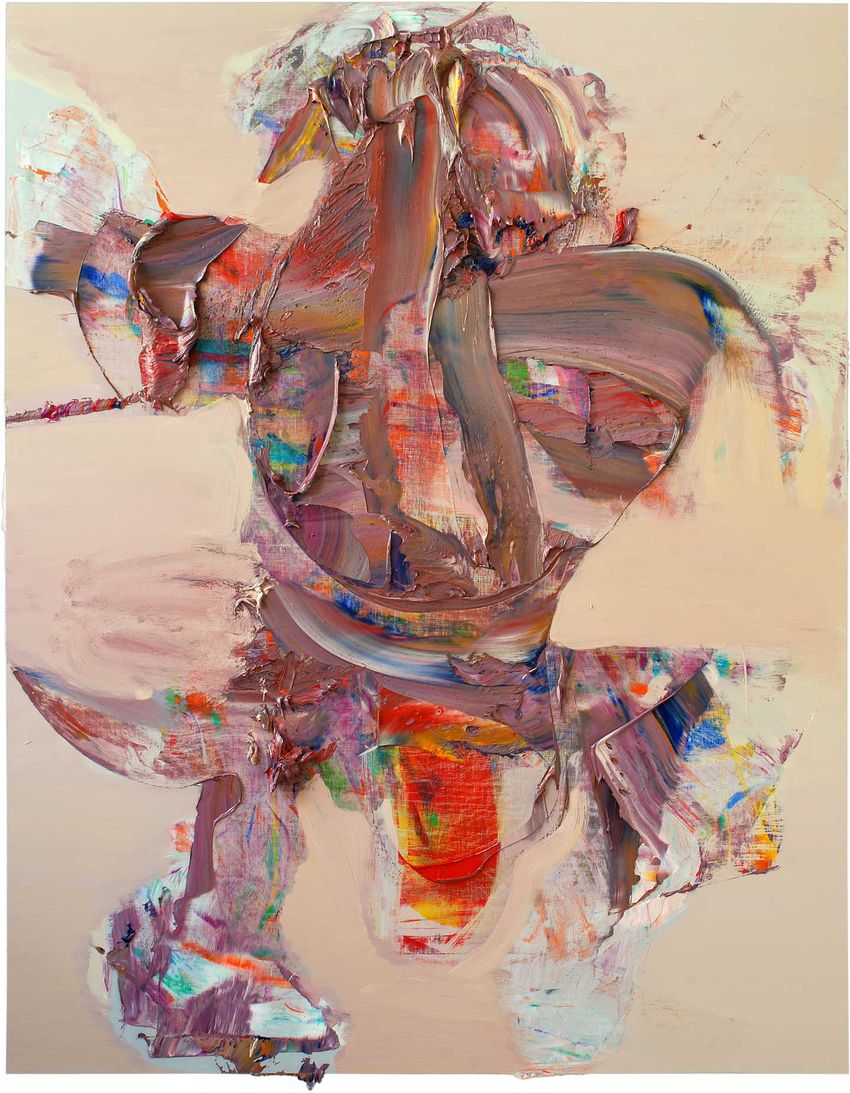 CCB Magazin:You describe your series “array” with the words: “to give back to the human being something human by using the most artificial vocabulary available”. Is the human being getting lost in the society?

Antonio:We have not lost the human being, we are losing its humanity. A person, to fit properly in our system, has to act conventionally and to follow the rules. This is not new or strange, that is the mechanism of basic adaptation. But I feel that in our highly sophisticated culture, a rich level of adaption is turning into something inhuman. We are losing the individual and its diversity, with many people wishing to be different, but with diversity consistently codified and therefore itself becoming uniform. I firmly believe in the transformative and revolutionary power of art. Art of course will never change a society, but it can change a single person.

We have not lost the human being, we are losing its humanity

Antonio:For example: I see myself as a communication channel with the universe. My duty is to remain true, at all costs, trying to avoid disturbing the transmissions.

CCB Magazin:Antonio, what do you plan for your future?

Antonio:I would love to move back to Berlin. My love for Berlin is intact, but I would wish to change myself yet again and so I am thinking about living in another culture with a different sensibility. But the destination is still open. Actually I have started an ambitious new series of figures painted on an elliptical three dimensional surface; so now it is important to me to stay focused in the studio.

CCB Magazin:Last question: Leipzig is now on the second place in the football Bundesliga. Could they win the championship?

CCB Magazin:Oh no, false answer! I’m a fan of Borussia Dortmund. Let’s talk about it in a few weeks, okay?

Antonio:Haha, okay, Jens, let’s talk about it then.

CCB Magazin:Antonio, thank you and we stay in touch. 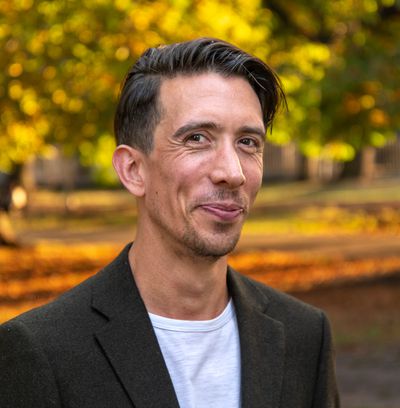 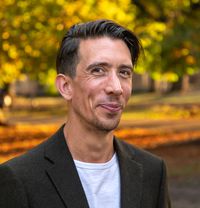 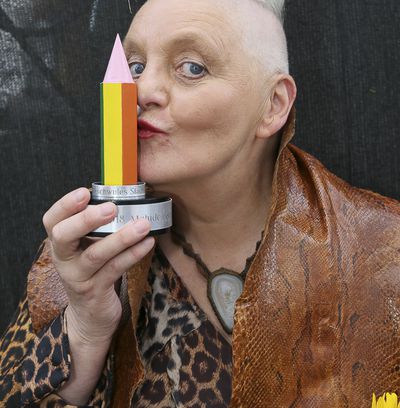 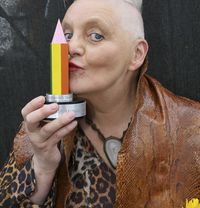 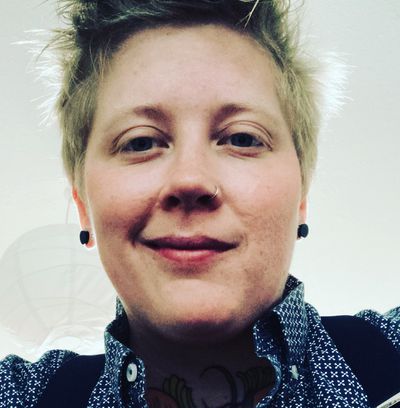 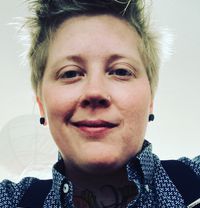 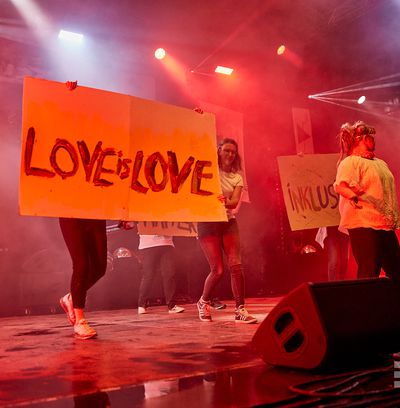 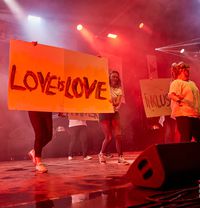 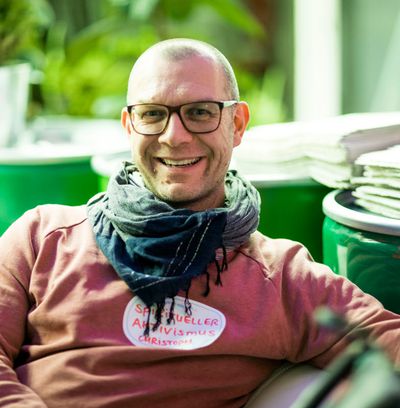 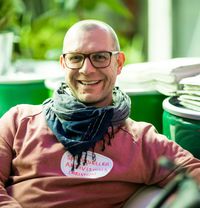