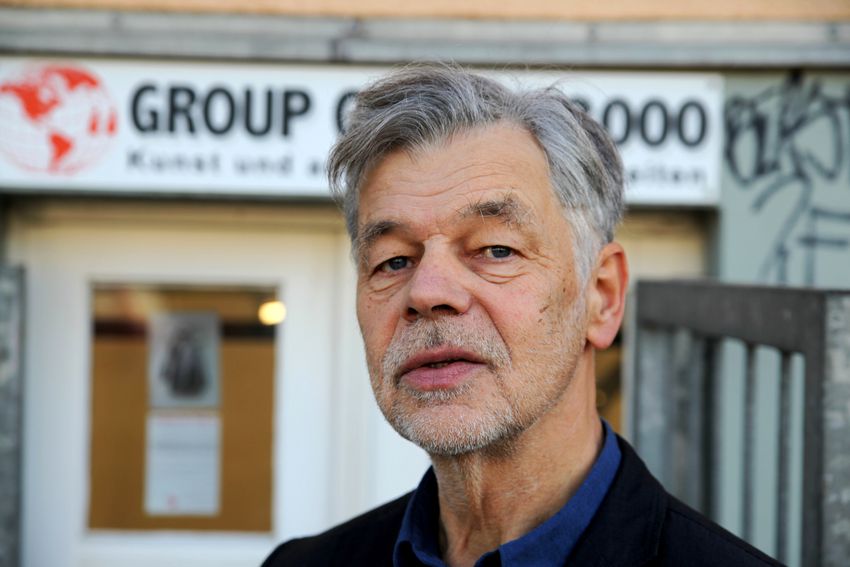 Tom Albrecht has a name in Berlin. In the 1990s, he was the first environmental commissioner at the TU Berlin. Today he is a curator and runs the only "Gallery for Sustainable Art" in Berlin. We wondered, what can art contribute to the climate debate that the current discourse cannot? A visit to the gallery in Berlin-Kreuzberg.

Anyone in Berlin who strolls along Leuschnerdamm from Moritzplatz can hardly imagine that 30 years ago the death strip once separated the districts of Kreuzberg and Mitte. On the Kreuzberg side of the street, number 19, a sign immediately catches the eye: "Group Global 3000" is written on it in thick red letters and bellow it says: "Gallery for Sustainable Art". The deep, whitewashed windows don't allow a view of the interior, which makes me curious: what's there to see down there? A small staircase leads down through a double door into a basement brightly illuminated by fluorescent tubes - the gallery.

A piece of wood in the form of a charred club dangles from the ceiling. "This is the 'fossil club', you can quickly bump your head on it," says a tall man, who could also be the older brother of Max Ballauf. He found the charred log in a campfire in the children's farm around the corner. Most of the art objects here are made of found or recycled materials. So, my interview guest has already passed the first sustainability test.

From No Future to Fridays for Future

The man with the salt and pepper hair is Tom Albrecht, curator and founder of the gallery. Tom Albrecht is no stranger in town. In 1991 he became the first environmental commissioner of the TU Berlin. He came to Berlin as early as 1972, exactly the same year that the Club of Rome, the first association of globally alarmed climate experts, warned of the end of resources. But in the 70s and 80s Fridays for Future didn’t yet exist to push the buttons, instead there was No Future: New Wave and Punks were the dominant youth cultures who spread a sense of doom; there were no debates about abstinence and global warming, but empty highways because of the first oil price crisis in the Middle East, acid rain and lively discussions about the future of the forest. The German Green party was still in the starting blocks, with sneakers that could not yet be recycled; and they drove around in VW busses that stank like hell because they didn't have a catalyst. There were also no sustainability galleries in Berlin like Tom's, of course, though lots of squats and Ton, Steine, Scherben - and that was not sustainable either.

The sustainability discourse is simply overloaded with facts in many ways. There is a lack of direct encounters and images. Art creates such images

Tom invites me with a gesture to look around. Since 2012 he and a team have been running the "Gallery for Sustainable Art" on a voluntary basis, he says: three exhibition rooms, a toilet, a tea kitchen and a chamber for exhibition supplies, concealed by a roller blind. "It's a bit cramped here," admits Tom, “but big enough to fit 60 people”. 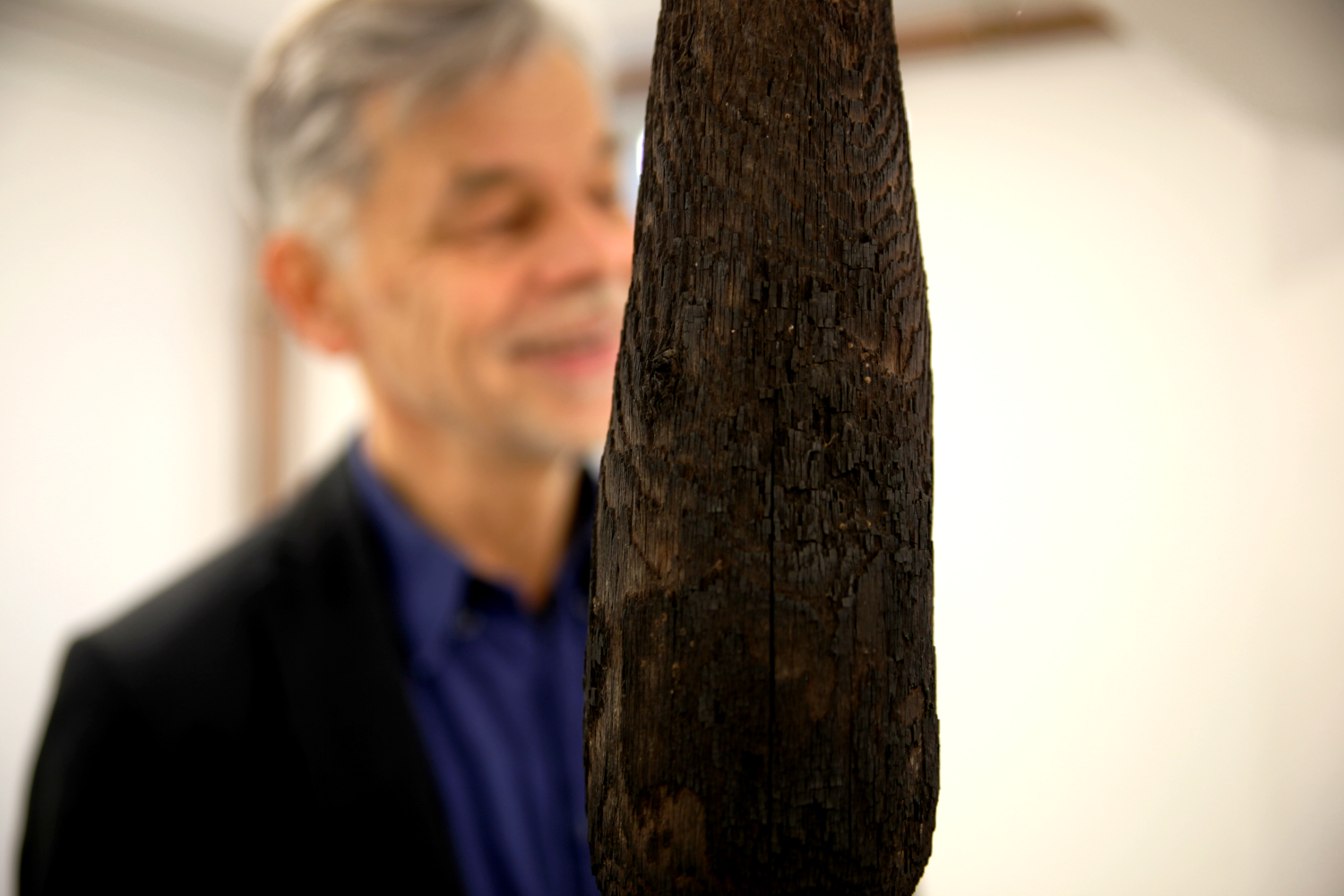 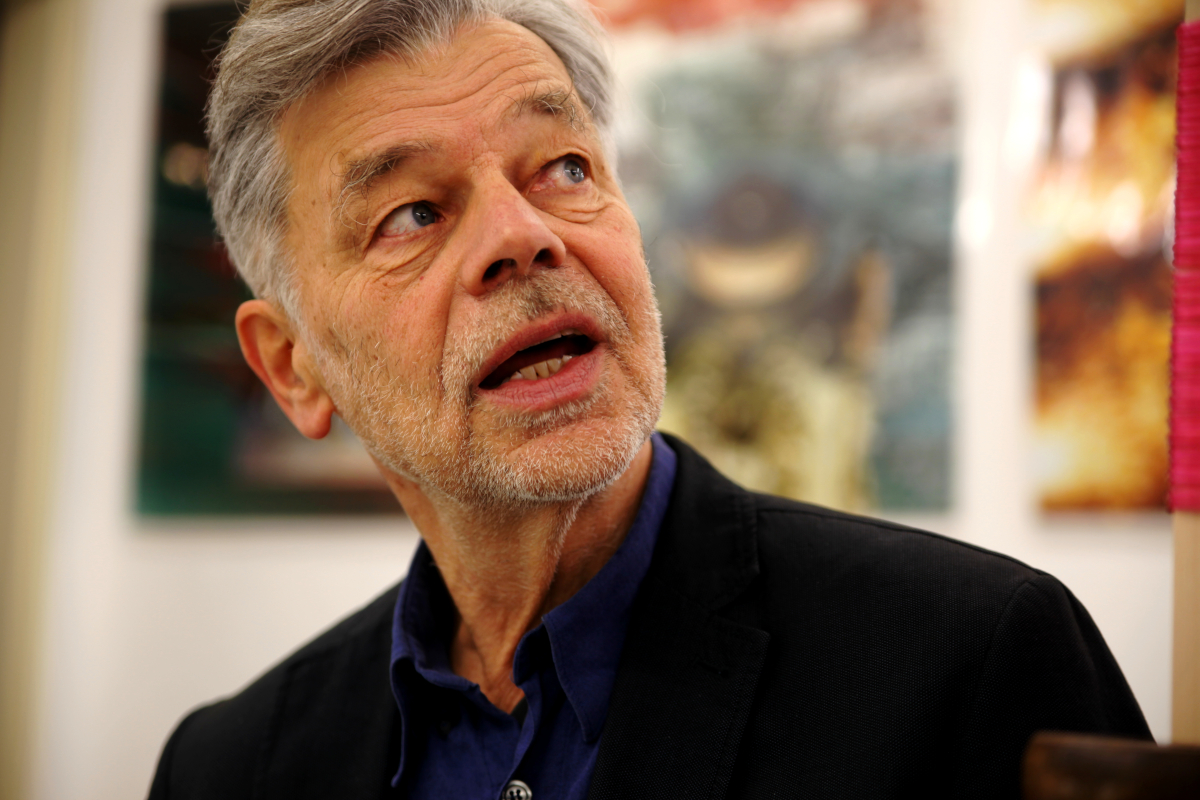 Above the club (first picture), below the confession: Whoever flies or eats meat can take his sins to confessor Tom. "Ecological confessional, 2019, Lioba von den Driesch". Photos: Jens Thomas

The last exhibition was called 'Artists for Future', the next one is entitled 'Fossil Addiction'. Exhibits hang on the walls and are placed in the room. The 'Fossil Club', for example, which I bump my head while walking through the room. The club hits back like a boomerang. "People believe that what they leave behind has no consequences," says Tom. The encounter with the club is a stimulus to live more ecologically. Another exhibit by Lioba von den Driesch is the 'confessional for ecological sins'. It looks like two chairs arranged on the backrests, next to which is a stool with a chewing gum machine. "The confessional for ecological sins is ready," says Tom with a mischievous grin and offers himself to me as confessor. "The average CO2 emission in Germany is 11.6 tons per capita per year. A transatlantic flight from Düsseldorf to New York already generates 3.65 tons of CO2. We pretend we can go on like this forever," says the confessor. In the "Gallery for Sustainability" you can admit your flight sins and fleshly desires - the worst environmental sins -, be ashamed of them and apologize with a handshake, as if there were a morning after. For a symbolic 2 cents you can also get a CO2 certificate from the chewing gum machine. And a little book has ready-made psalms for your sins. For example: 'My children and grandchildren sanctify the means'. "Since we all emit CO2," says Tom, "humor is a good way to address our contradictions about sustainability without having to be missionary. Dialogue works better with humour, he says.

The project space as social sculpture

The issue of sustainability, on the other hand, is not at all humorous. Tom remembers exactly how the discourse has unfolded over the years: first the Brundtland Report of the United Nations in 1987, which is regarded as the beginning of the worldwide discourse on sustainable development, then came the alarming Rio Conference in 1992, and now it is the 17 Sustainable Development Goals of the UN, which Tom displays in the gallery and is supposed to scientifically support the art objects. Just like in the next room. Here you can watch videos. The artist Keeley Haftner looks straight into the camera with unmoving facial expressions. She takes a water bottle in her hand and fills it with colored glitter, shakes it vigorously and drinks. The first sips of the darkly glittering swill are still flowing bravely. Then she has to burp, puts it down and drinks again. The fight with the glitter is visible in her face, the martyr's facial expressions are slipping away. Heroically she continues to drink until the bitter end. After 5 minutes of self-torture, she holds an empty 1-liter bottle up to the camera. Made it. "The video visualizes the dominance of microplastics in our oceans, how living beings consume it and how it gets into our bodies via the food chain," Tom interprets the video, which runs in a continuous loop.

The current discourse focuses on the ecological dimension, but it is also about the reality of people's lives: about social sustainability. Project spaces are door openers for this

We continue through the gallery. Tom talks as if standing at a lectern, the imparting of knowledge seems familiar to him. Originally from Düsseldorf, he grew up in the immediate vicinity of Joseph Beuys - Beuys is his great artist idol. He himself studied mechanical engineering and later graduated in social sciences. He only ever made art on the side. "To this day I regret not having studied art. Nevertheless, I can be an artist without having to show it on a certificate - Beuys taught me that," says Tom. Today, he uses objects, installations, photographs, videos, words and actions to express his ideas. For him, project spaces managed as a team - like his gallery - embodied the epitome of social sculpture. According to Beuys' concept of art, they pursue the goal of influencing society through art in a formative and re-formative way. One could also call it social sustainability. 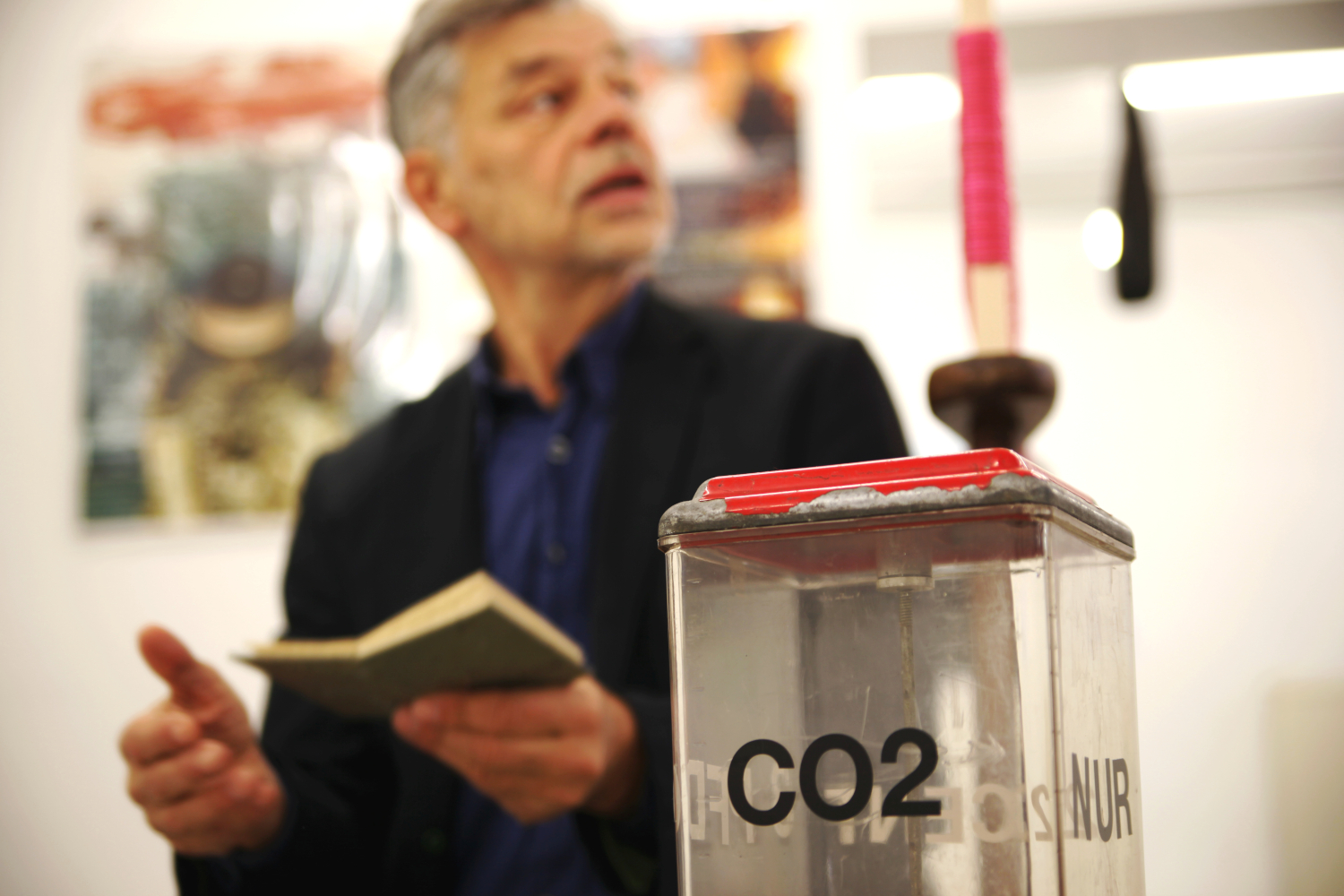 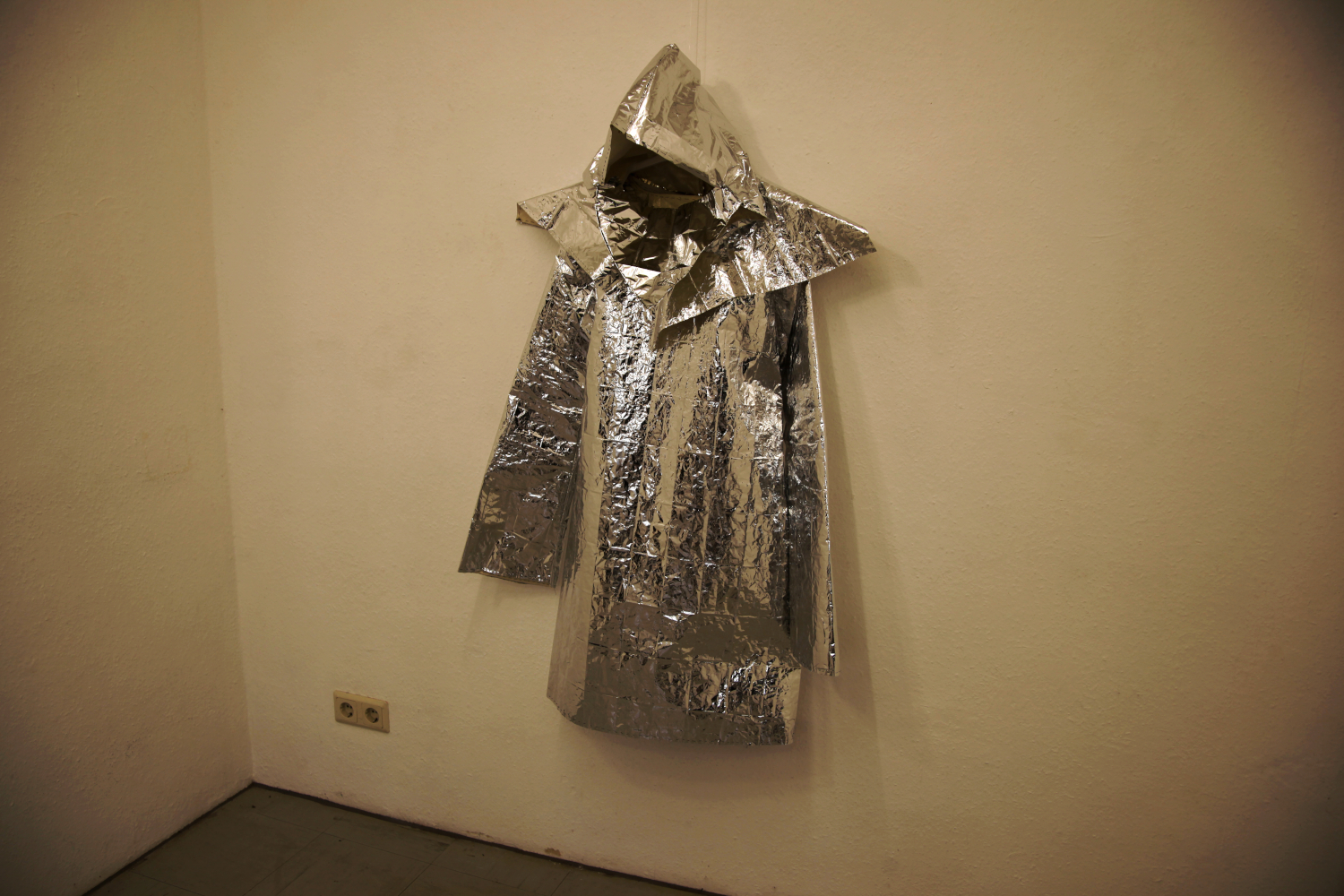 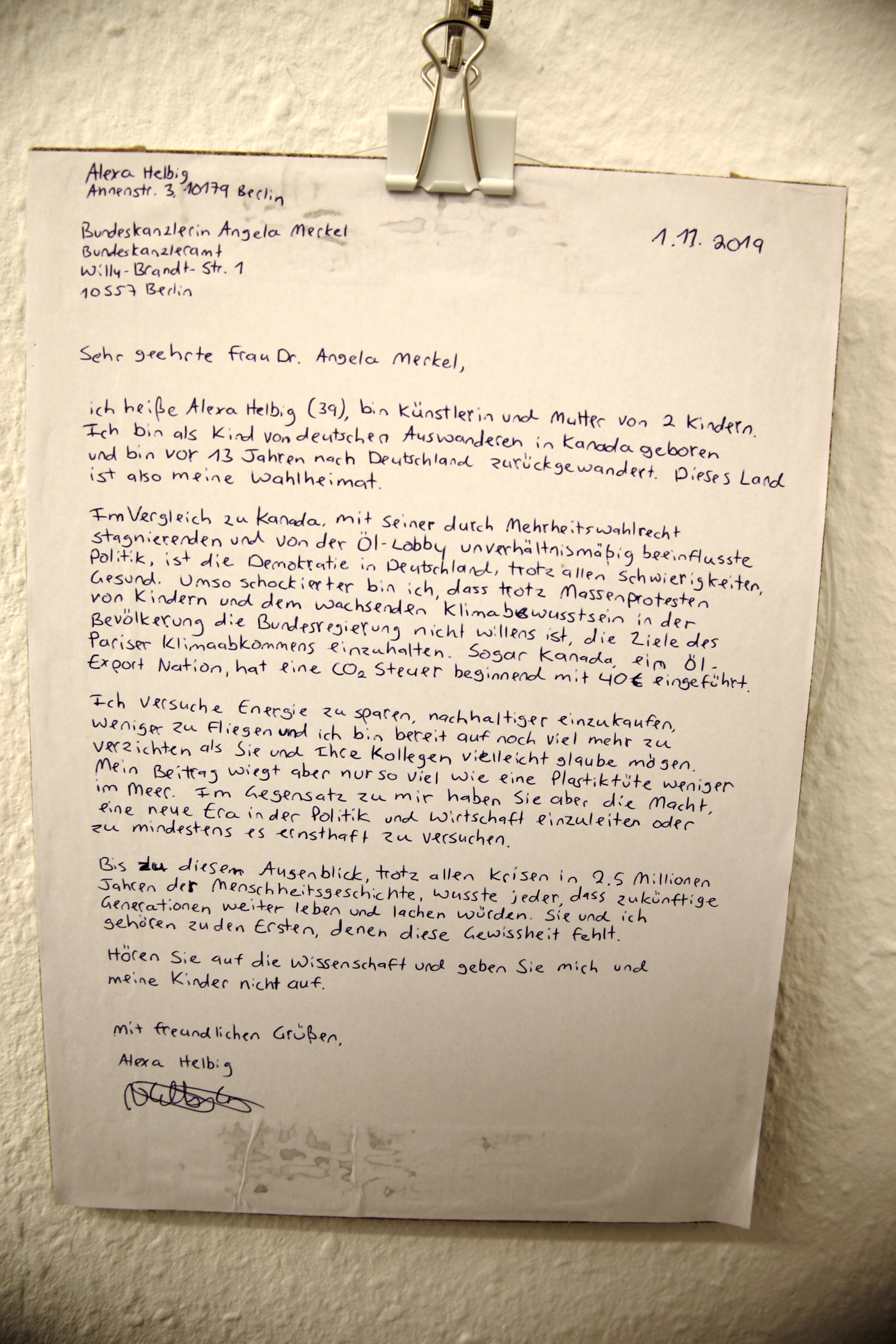 The project space "Gallery for Sustainable Art" is a novelty in the city. Galleries are a dime a dozen today, in Berlin there are 450, and there are up to 150 project spaces that have been struggling to survive for years due to the lack of space. But there is no one that deals exclusively with the topic of sustainability. I ask Tom why. And what can art contribute to the current climate discourse that Fridays for Future can't? "The sustainability discourse is simply too fact-laden in many ways," says Tom, "it lacks direct encounters and images. The "Gallery for Sustainable Art" brings together facts and images in the visitors' encounter. "In order to reach people, discourse and powerful images are needed. And art creates such images." Environmental activists like Extinction Rebellion, for example, would have learned a lot from Performance Art, says Tom. Art is also about staging, the environmental activists would cleverly use this for themselves. "The current discourse focuses on the ecological dimension," says Tom. The gallery is about the reality of people's lives: about social sustainability.

We know the facts and yet we buy SUVs and fly to Thailand or Mallorca twice a year. This is typical addictive behavior for me

The addiction to fossil goodies

The logo of the gallery, which shows two globes depicted diagonally one behind the other, ironically demonstrates the all-embracing nature of his words. The name "Group Global 3000", or GG3 for short, is indeed an "allusion to global companies with big names". But in all seriousness, "we live as if we had a second world", explains Tom. GG3 is not primarily about the sale of art objects. It is about artistic encounters and performative making. As a non-profit association and non-commercial gallery, financed by donations, Tom himself pays the rent every month. He himself is now a pensioner. Otherwise, he wouldn't be able to run the gallery with such intensity if he had to do extra work, says Tom. Another important financial injection was the Project Space Award won in 2016 by the Senate Department for Culture and Europe Berlin. "I'm still happy to be able to rent the space. But there are desires that are getting louder and louder," says Tom. A glance across the street is enough to see what else has changed besides the noisy traffic: many new buildings with glass balcony railings. Tom lives above the gallery in the old building.

Creating art and connections, commenting on the madness of growth, linking art with science and inviting the neighborhood to talk - that's what Tom Albrecht is all about. His next topic he is working on is the 'fossil addiction'. He says: "We know the facts, we know about our harmful behavior and yet we buy SUVs and fly to Thailand or Mallorca twice a year. This is a typical addictive behavior for me. The lungs bite, but hey, what the hell." Tom analyzes this soberly, and one can well imagine how he once worked at the TU Berlin. Like all GG3 exhibitions, this one, too, is based on four events: vernissage, finissage, artist talk, as well as topic-related lectures by scientists. "This time, Professor Dr. Hermann Ott, managing director of ClientEarth, and the addiction medicine specialist Professor Dr. med. Tom Bschor, chief physician of the Schlossparkklinik, will come and talk about our fossil addiction in society," says Tom. Since the foundation, more than 200 artists have exhibited at GG3, the address database has more than 1000 contacts.

The future. This is what the "Gallery for Sustainable Art" is all about. The question is whether project spaces in Berlin have a long-term future in the city. "That remains to be seen," says Tom. That the existence of project spaces in Berlin is threatened was already shown by the study "Project Spaces: Vital, but fragile heart of the art scene" by sociologist Séverine Marguin a few years ago. According to the results, a project has to get by with less than 5,000 euros a year on average in Berlin. That is not sustainable. Currently, more and more project spaces are also becoming so-called "placeless" spaces because there are fewer free spaces or they are simply too expensive. Tom is worried about the future of the gallery, although he is in tune with the current climate debate. The subject of ecology with all its social and economic implications is far from exhausted. And a Gallery for Future is just what this city needs.