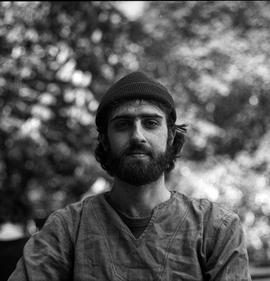 It's not folk, but its Folkish...Kaurna at 20 years of age has travelled Europe & Australia with his unique Nu-Folk Music. Combining Traditional Folk with contemporary sounds & a natural ability to capture & inspire, Kaurna & band are troubadours at heart telling beautifully intimate tales.

Fortunate Holders plays 'harmonic folk/pop'. Their music is an interaction between five voices, piano, guitar, accordion, banjo, drums en electronics. The band was formed in the Dutch city of Groningen but the members have since scattered all over the country.
Fortunate Holders was founded in January 2010 by Daan and Ruud, but wasn't complete until a year later. After a year of hard work they released their first EP 'Automatic Processing', consisting of five uplifting songs with a summer feel. Their second EP 'Introspection' was released this year and has more of a dreamy feel to it. Last summer, the band played at Noorderzon festival in Groningen and traveled to Berlin twice to play some gigs and bring some joy to the people on the street. Another milestone was reached when they played live on national radio station 3FM in March.
The band gets their inspiration in two different ways. On one hand, they are influenced by artists such as Fleet Foxes, dEUS, the Shins and Ben Howard. But a lot of their ideas are inspired by the concepts of love, freedom and happiness.

Dury left Iraq in 2000 and started to travel around with his music. He mixes the traditional Baghdadian songs style (maqam) with Rumba, Gipsy and Balkan rhythm. After many years in Damascus he his now based in Berlin recording his first album after 14 years of playing and composing. Lately he formed a band and performs in Clubs and in the streets.

Whiskey Bliss (Whitney Fliss) is a blues and jazz singer, musician, and multifaceted performance artist traveling with her accordion across Eastern and Western Europe. She hails from Seattle, Washington, USA where she managed a swing and acrobatics dance company, The Harlequin Hipsters, and appeared with her solo work in cabaret shows at various nightclubs and theaters. She performs original compositions, country blues, jazz, and American folk music on accordion and piano. Throughout her European tour she has appeared in Blues Dancing Festivals in London, UK and Heidelberg, Germany, as well as in lives in Athens and Rhodos Greece, and Szimpla Badehaus in Berlin. She continues to travel and play music in the streets of Europe through Summer 2012!
about her music:
"I write songs to tell stories of love or to recall my dreams, which are fantastical visions of boats and oceans and waves and dancers and clowns. Some of my songs I wrote for my Commedia del' Arte dance troupe in Seattle, The Harlequin Hipsters, and a show we did titled "Passion or Death"--in which the world becomes plagued by a disease that kills those who are dispassionate about their lives. I write music to sing about the emotions in my heart and soul, and to connect with people through those feelings".

Jonny Kersten studied drums for 6 years then as he begun to sing hepicked up a guitar.It has been now 3 years he started writing, composing and busking the streets. Following his personal path and improving himself through the people and musicians he meets in the streets
.
http://www.youtube.com/user/MitFruchtSaft

Efrat Sussman is a self taught Israeli singer song writer.
At the age of 22 she picked up a guitar for the first time, two years after she started writing & composing her own songs.
For the past 7 years Efrat has been traveling around the world.
She believes traveling is the best school life can offer you & her music is influenced by the places, cultures and people she meets on the way.
Efrat has preformed in various bars/clubs around the world but she was always intrigued by the street culture & the fact that her music can be shared with random people who most likely wouldn't be exposed to it if it wasn't out there in the streets.