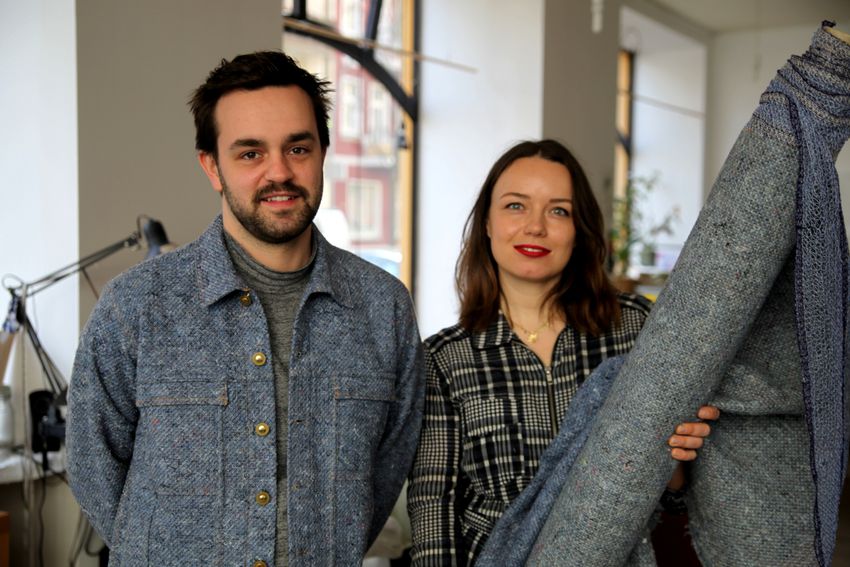 Jeans are 150 years old. Invented by Levi Strauss in 1847, jeans became a trademark of rebellion and recalcitrance in the 1950s - but that didn’t last. The label A New Kind of Blue wants to change that: It recycles old denim and sets new ecological impulses - dead pants come alive again. We visited Tim van der Loo and Sandra Nicoline Nielsen and asked: How do you produce the jeans sustainably?

Krossener Straße corner Gryphiusstraße. A dog pees on a bicycle, its master stands a foot away and looks on bored - Friedrichshain, always up for a joke. We have an appointment with Tim van der Loo and Sandra Nicoline Nielsen, who want nothing less than to lead the fashion industry into a new, circular age. Tim greets us warmly, we squeeze into the small kitchen wearing masks, the coffee is brewing and off we go.

The place: a co-working space in Friedrichshain where fashion designers and textile visionaries are sewing and leaning over textiles. In the front you hear the rattling of the sewing machines, in the back is the label A New Kind of Blue located. Their current project New Blue is one of countless projects that have taken up the cause of sustainability. However, they are almost the only ones who specialize in textiles and produce new jeans from recycled denim. The problem: Conventional jeans are usually manufactured using high levels of chemicals. The popular used look is created by sandblasting - whereby the escaping dust can lead to deadly silicosis ("dust lung") if unprotected, or is driven by means of aggressive and health-endangering chemicals. And even in organic jeans production, water is consumed to a large extent, even if toxic chemicals are replaced by substances that are less harmful to the environment and health. How does New Blue solve the problem?

Tim van der Loo and Sandra Nicoline Nielsen start explaining: Their goal, they say, is to make the old look new. This way they not only want to save resources, but shape a new consumer consciousness altogether. Because the current principle of the fashion industry works like this: "Take-Make-Waste". Cotton is harvested and processed into a product at record speed. It is then sold cheaply and, after use, burned or dumped in landfills. All this, says Tim, is a linear process, the quality of the products is usually low, and the clothes are quickly replaced by new ones or thrown away by the customer. He became aware of the problem two years ago when he worked for Textilhafen of the Berlin City Mission, a non profit organization that collects clothes for the homeless. Forty tons of clothing arrived there every month, he says, but only 15 percent of it was usable, the rest had stains or was too old and was thrown away. That's how he came up with the idea of New Blue's recycling concept. He asked himself, how can you use the old jeans to make new textiles? And especially for the hand-me-down jeans, there were no processes for this. After graduating in 2019 from Kunsthochschule Weißensee in Berlin, he received a grant from Designfarm Berlin to realize the development of New Blue. He was joined by 33-year-old Dane Sandra Nicoline Nielsen, whom he had met a few years earlier at a festival on the circular economy.

New Blue is an attempt to shape a new consumer consciousness - against the take-make-waste principle of the fashion industry, against the throwaway mentality of consumers

We change the room and go to the production area. Tim shows us the patterns created by his recycling method: He takes the disassembled parts out of a bag, from which he shapes new things; new things from torn trouser scraps, things that would usually be thrown away. New Blue combines two technologies to do this: The so-called fleece forming and digital aided embroidery. Tim developed the technique of fleece forming together with the Saxon Textile Research Institute; the old, stained or otherwise unusable jeans are torn into their fibrous components and separated, then a fleece is formed from the fibers by carding and fleece laying, which is afterwards compressed. In the second technique, digitally supported industrial embroidery, the fleece is consolidated in a final step into a stable fabric, which can then be used to make patterns for pants - dead pants come back to life again, pants that we now see right before us.

The pants though do not resemble ordinary jeans, they are thicker, fluffier, more what for cold days and warm thoughts. The special feature of the process: No chemicals are used for this recycling method, nor is water consumed as in conventional jeans production. Tim describes that this is how they want to counteract the "take-make-waste" principle. Sandra adds and illustrates the process in figures. The ecological footprint - she quotes the widely respected report "A New Textiles Economy" by the Ellen MacArthur Foundation - is a disaster in the fashion industry: CO2 emissions in 2015 were 1.2 billion tons, as high as international air and sea traffic combined. The report concludes that a value of $500 billion a year would end up in the trash due to the throwaway mentality and lack of recycling of clothing - with a total value added of $1.3 trillion, that's a huge amount. Only one percent of the world's clothing is recycled. The chemicals used to make clothing, such as dyes and bleaches, and microplastic particles that enter waterways through washing are a serious environmental concern. Environmental organizations and fashion players are aware of this, but little is being done to change it.

At 1.2 billion tons, the fashion industry's CO2 emissions are as high as international air and sea traffic combined. 500 billion dollars worth of clothing is thrown away every year - a huge sum given a total value added of 1.3 trillion dollars

That's why New Blue is working hard to change that. The method, says Tim, can theoretically be repeated continuously. The product does not necessarily have to be made of denim; the technique can also be applied to polyester or wool, for example. Aesthetics are also important to him. Here, each pair of pants gets "a story" that, the idea goes, continues endlessly. "The circular economy system will change the world," Sandra is convinced. She has a degree in techno-anthropology and has worked in waste management herself. The pants duo is still in the prototype phase. The road to a product that even Monsieur Tout le Monde can afford is still long, especially since it is important to the two creators to produce locally and guarantee fair wages. They are currently working with a textile research institute in Spain to find sustainable dyeing methods - with initial success. 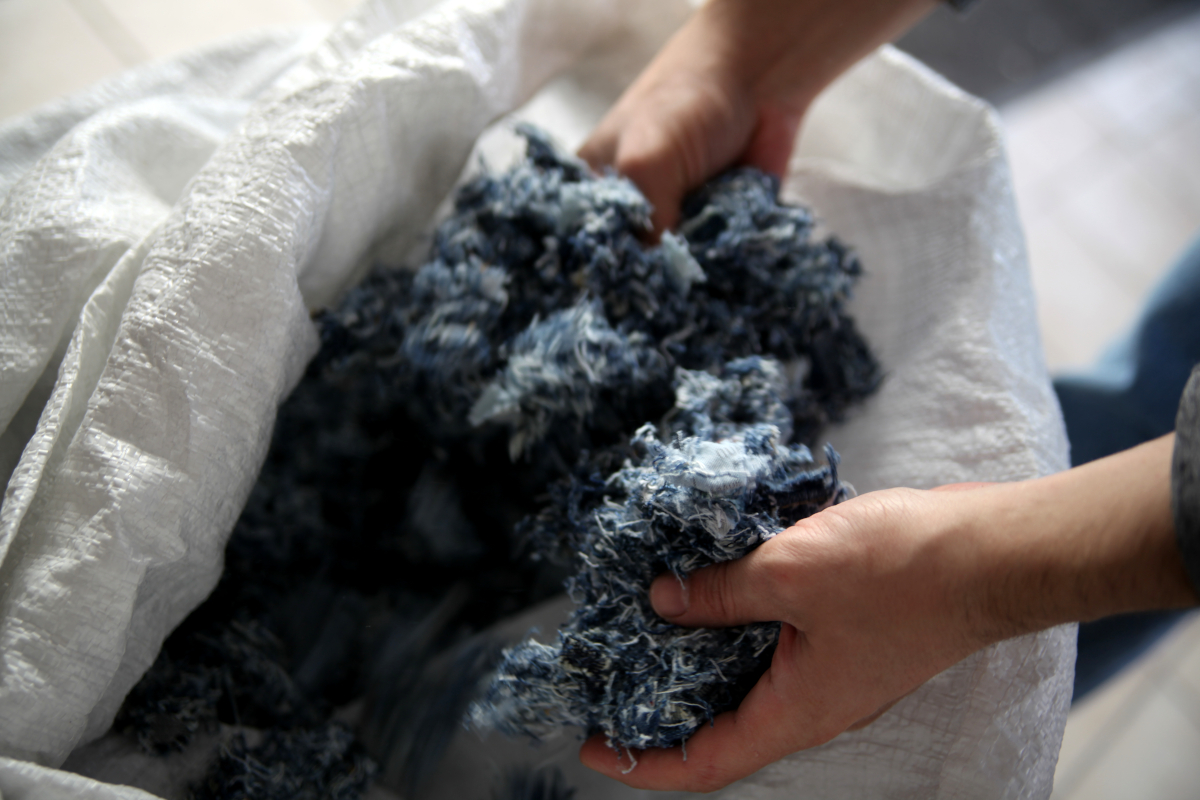 Old jeans fabric scraps, after being shredded into their fibrous parts, are formed into a new fleece. Photo: Jens Thomas

But can you make a living from the pants? So far, New Blue has primarily been an experiment to see whether jeans can be made sustainable and recyclable. Tim shows us a jacket that looks as little like jeans as the pants. A denim prototype of a sneaker hangs on the wall. "That could be another product for the future," Sandra says. How it will continue, she says, is not yet known. At the moment, the duo is receiving funding from Re-Fream, an initiative of the European Commission, to push the development of New Blue, after which the next step would come. However, whether the product can be commercially marketed afterwards ultimately depends on possible partners with whom they want to work, says Sandra. One could also imagine producing directly for the Levis brand. The only question is whether the eco pants will then simply be manufactured by the competition. More and more fashion chains are taking up the cause of sustainability. The "Pulse of the Fashion Industry" report is not the only evidence of this. In June 2021, a new supply chain act was passed that will force companies with more than 3.000 employees to be more sustainable from 2023, even though the law has a few loopholes and labor and environmental protection remain problematic in the fashion industry. 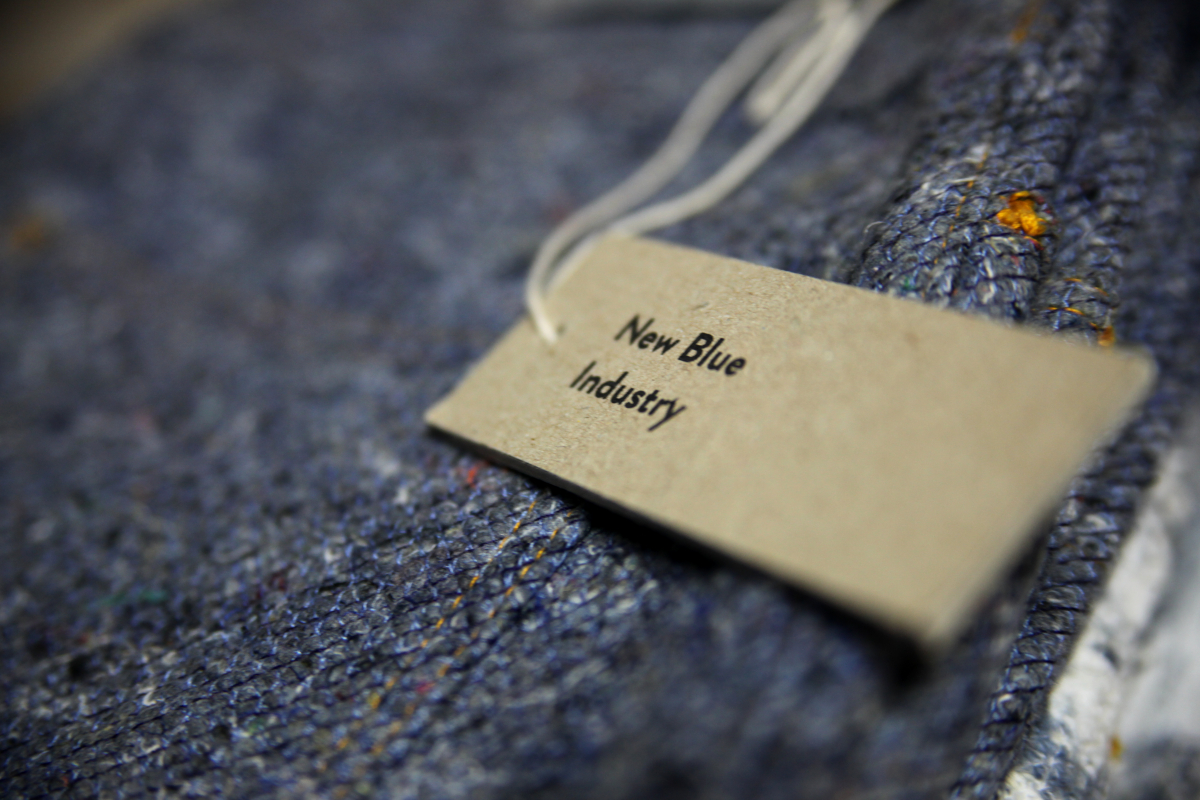 All in all, our visit shows: the denim pants are alive. They are now 180 years old. Invented by Levi Strauss in 1847, they are now being reinvented. First worn by workers, farmers and cowboys in America, jeans spread all over the world after the Second World War. Especially in the 1950s, they became a trademark of rebellion and recalcitrance - but the pants were never ecological. Actors like Marlon Brando made them popular, and jeans became a statement against convention and outdated moral concepts - now jeans may be getting a new spin: they are being sustainably converted and designed. In the future, they could even be a statement against an exuberant throwaway mentality. That's how the beautiful stories always begin, and that's how the world changes - and that's also how our conversation ends. We say goodbye with a fist bump from a distance of 1.50 meters, straighten the mask and take one last look at the denim patterns. It’s still cold outside. No dog in sight.

kling klang klong is a 9-person sound collective from Berlin-Friedrichshain. …