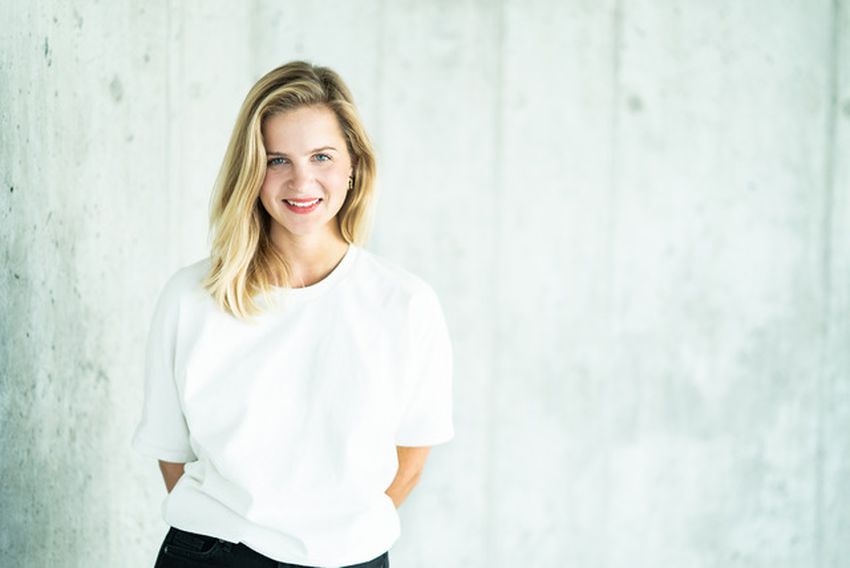 Scant oft scent: People in long-distance relationships often suffer from the absence of the smell of the beloved one. A used piece of clothing can help the olfactory memory along - but only for a short time. Designer Essi Johanna Glomb has researched this and tries to integrate individual scents into textiles to bring long-distance relationships closer again. How is this possible? And does it work? A conversation with the inventor.

CCB Magazine: Hello Essi, you are an independent designer and researcher and teacher at the Kunsthochschule Weißensee. What are you focusing on?

Essi Johanna Glomb: I'm particularly interested in design as an interface between concepts, science and society. I also do research in this field - with an artistic touch. What interests me basically are not so much individual product developments as social or cultural problems that can be addressed by means of design. These can simply be impulses or suggestions for solutions. Textiles are my main medium, because a lot of things can be conveyed through them.

CCB Magazine:You explored an idea of combining smells with textiles to bring long-distance relationships closer. How did you come up with the idea of "Smell Memory Tools"?

CCB Magazine:How did you pursue your research? In the past, you simply grabbed a T-shirt from your boyfriend or girlfriend and took it with you to smell it when you missed the other person. Is it even possible to integrate a person's individual scent into a textile?

Essi Johanna Glomb:As you indicated, olfactory memory is much deeper than visual memory and can evoke strong reactions. Smells are emotional, smells permeate you. That's why people love to smell their loved one's clothes. But the smell unfortunately doesn't last long in the garment. Historically speaking, there was the perfumed handkerchief of the beloved one to do the trick. And I picked up this idea. In fact, it is not so easy to capture the individual smell of a person. First of all, what is the individual smell of a person anyway? It is influenced by perfumes, deodorants, creams, hair gels or food. So, from that point of view, it’s difficult to realize the task as well as from a chemical point of view. There are, indeed, machines that can pick up the molecular structure of smells and recreate it. But I wanted to integrate more than just an odor into a textile. So, I had to think of something else.

Essi Johanna Glomb:I wanted to create a kind of ritual. A ritual through which couples together create a fragrance for themselves, which they then associate with each other. The memory of the moment of creating it together should reinforce this connection. I got inspired by the famous Madeleine scene in Marcel Proust. In the novel, the protagonist bites into a madeleine and his childhood comes back into his consciousness with full force. And so, it’s with many smells that can suddenly surprise us and awaken an old, deeply hidden and very vivid memory from the past.

The olfactory memory is much deeper than the visual memory and can evoke strong reactions. Smells are emotional, smells permeate you

CCB Magazine:And that worked? How exactly did this ritual take place? That sounds a bit mysterious, I have to say.

Essi Johanna Glomb:In this context, I have been working more intensively on olfaction and have been collaborating with a psychologist from Sydney who is conducting quite exciting studies and experiments on this. Originally, it was about people with olfactory disorders, whom he treated. In his studies, he tried to assign colors and shapes to certain smells and had his patients draw them. I adapted his idea for my ritual. I did workshops with couples from long-distance relationships who put together individual scents and drew those scents afterwards. Their abstract drawings, in turn, were the template for textured blankets, which I implemented as a knitted fabric in the next step. In this way, I tried to link the olfactory experience with a visual experience, in order to reinforce the shared moment. 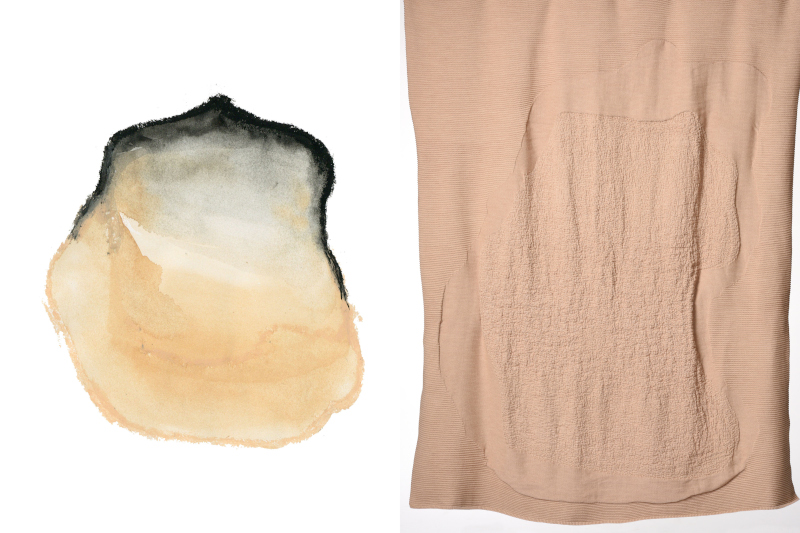 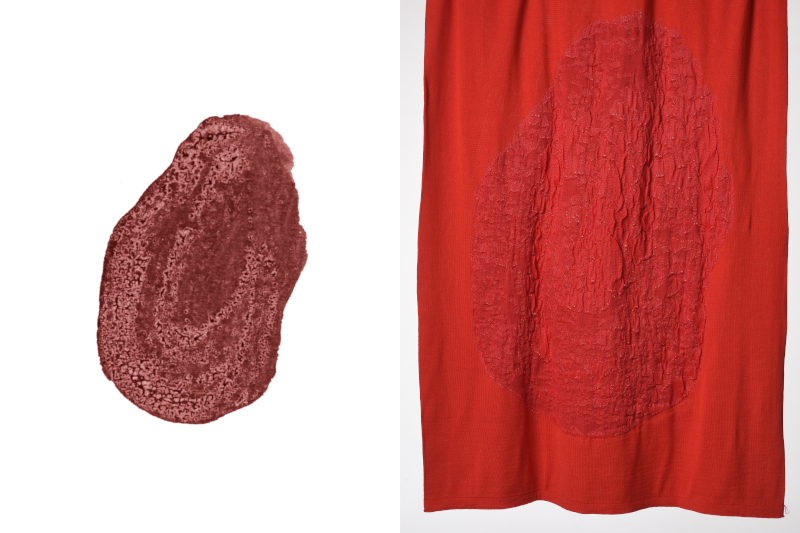 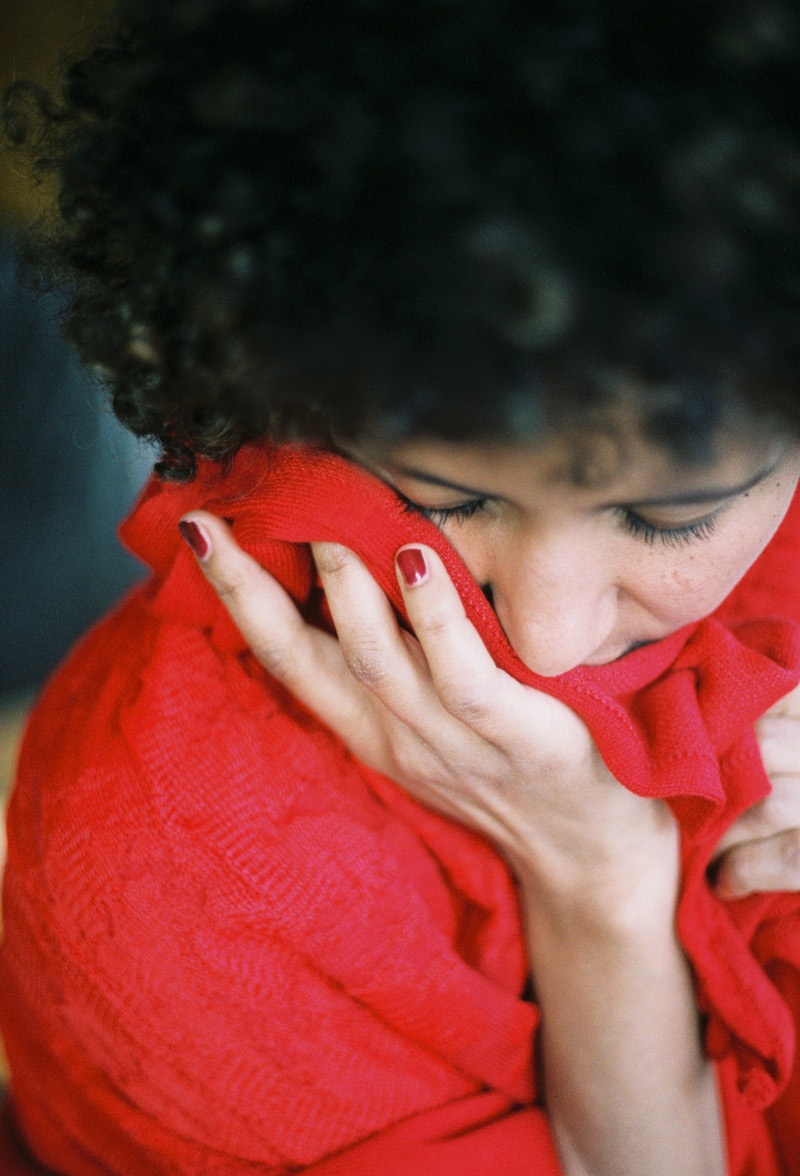 CCB Magazine:For your research project, you also collaborated with the Fraunhofer Institute for Applied Polymer Research in Potsdam.

Essi Johanna Glomb:Exactly. As a starting point for the ritual, I developed a toolbox with six different scents, which in turn could be used to mix new combinations of scents. Similar to a perfume, actually. This toolbox was the basis for the workshops. The essences or oils combined by the couples were then microencapsulated at the Fraunhofer IAP in a special process and the textile ultimately impregnated with them. Friction releases the scent, which remains in the fabric for a very long time, even several months. The textile can be re-impregnated again and again to renew the scent. And to achieve all this, I needed the help of the Fraunhofer Institute.

CCB Magazine:I find it a bit difficult to imagine that a one-time olfactory experience can already become such a familiar shared smell. How was the feedback from the couples you did the workshops with? How many joined your experiment?

Essi Johanna Glomb:First of all: the olfactory memory is incredibly precise. You can have perceived a smell once briefly and it is already stored in your brain. Of course, the emotional connection with the smell doesn't develop immediately, but only comes with time. The process is very complex, which is why I have only conducted the workshops with a small group of about ten couples. So far, the feedback has been very positive and I have already received further requests for workshops. For sure, the workshops have left a lasting emotional memory on the couples. The results of the drawings and smells were also exhibited afterwards.

CCB Magazine:What kind of textile did you use and how did you process it?

Essi Johanna Glomb:The process I used to create the textile is called jacquard knitting. With it you can create free patterns, which can also be realized on-demand. As material I used merino wool and viscose, because those materials are well suited to absorb the impregnation and feel good on the skin. I had the knits implemented at Knitwearlab Amsterdam on industrial machines, having previously done numerous experiments myself on smaller flatbed knitting machines. The digital programming for industrial implementation is complex and takes a lot of time. 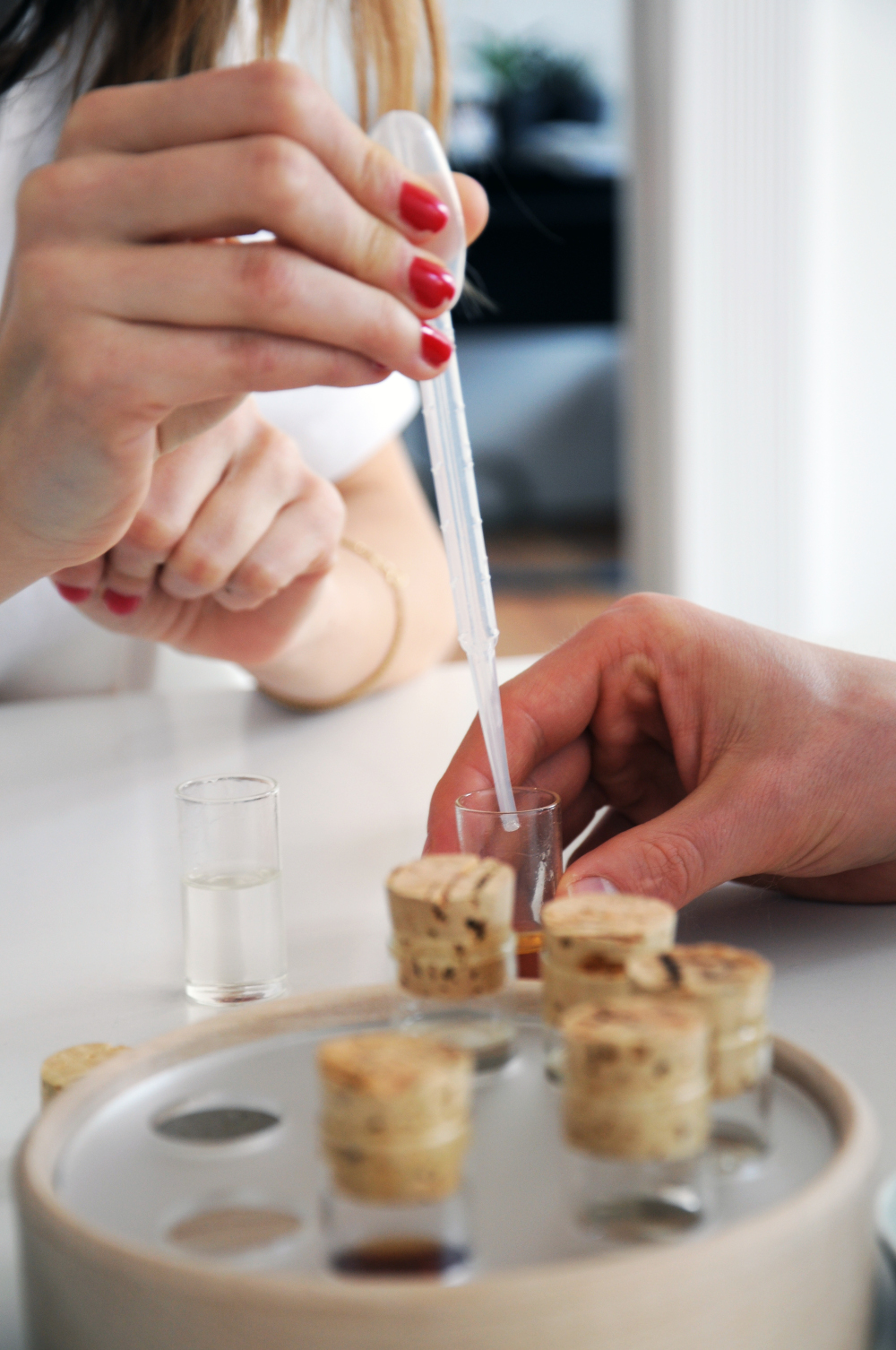 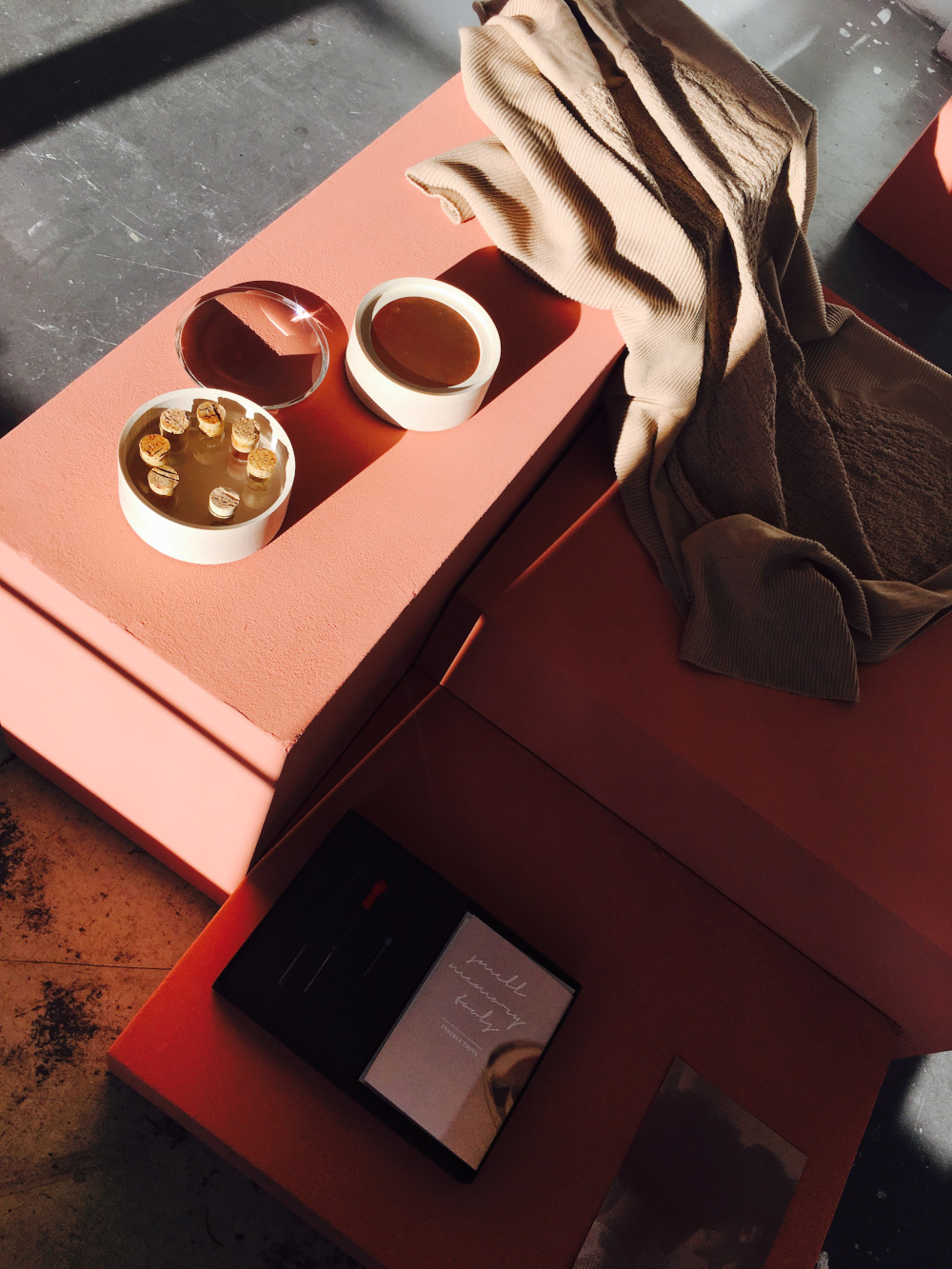 Toolbox and pipette - this is how the individual odors are created. Photo: EssiGlomb

CCB Magazine:Can your idea be commercialized?

Essi Johanna Glomb:Of course, the whole thing is a very conceptual work and not a product that you can buy off the shelf. But that wasn't my aim anyway. I wanted to set an impulse to address this topic of long-distance relationships through design. Last but not least, it was also an artistic statement. In the context of Corona, we are currently working on various exhibition possibilities to transfer my original idea with the smells to other concepts.

CCB Magazine:Ok, but how much does a custom scented blanket like this cost?

Essi Johanna Glomb:It depends on the size of the textile. But the pure production cost of such a blanket is about 600 euros. The couples with whom I did the workshops didn't have to pay anything for it, though. Fortunately, I was able to do the work at the Fraunhofer Institute without any costs; they liked my idea and therefore supported me.

Good, innovative things can come out of the collaboration between art and science. Design driven innovation - that's what I call it

CCB Magazine:What was the incentive for the Fraunhofer Institute to help you with your project?

Essi Johanna Glomb:That's what's so exciting about it, the dialog between design and science. This exchange can be very fruitful because it provides impetus or even creates solutions. New Blue, which makes new jeans from old jeans remnants, is a good example of this. They, for example, collaborated with a textile research institute. In other words, good, innovative things can come out of the collaboration between art and science. Design-driven innovation, as I like to call it.

CCB Magazine:In addition to your teaching at the university, you also have your own design studio together with Rasa Weber - Studio Blond & Bieber. What is that about?

Essi Johanna Glomb:The studio is actually a bit more commercially oriented and deals with the development of sustainable textiles in the context of fashion and interior. We have developed dyes from algae and other natural residues and are using them in various applications. The topic of sustainability is currently very crucial and the most important in the textile industry.

CCB Magazine:Essi, thank you for the interview.