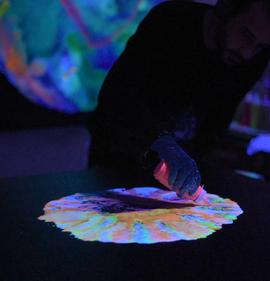 Cor: The Latin word for the heart.
But also „core” which in the English language indicates the fundamental and most important part of something, as well as the central band of the human body, the center of the kinetic chains from which all movements start.
The series COR, Multiform Hearts reflects a dialogue between abstract and perception. An in-depth study of the “heart” decoded not as an organ or as a metaphor for love but as a functional unit of meaning: source of life, memory, thoughts and emotions.
Multiform Hearts represent the abstraction of the void trapped in a hole and observed in its frontal and deep view.
Crossing the door of apparent nothingness, consciousness and unconsciousness of the observer experience a vision that stretches beyond the boundaries of the size of the canvas: a total immersion in the sublime space of a stain, never equal, made of infinite shapes different from each other.
Darkness, void, absence, and loneliness receive the colour that becomes a visible luminous form apt to erase the darkness and to establish a cohesion between them.
Fluorescent resin, acrylic, pigments, oils, alcohol and plaster spread like a funnel on the black canvas, creating shades, multiform spots, chromatic interlocking, transparent layers and extremely fluid tonal transitions: a body that lights up and floats in nothingness.
The technical gesture is characterized by pouring the colored resin into the workspace, followed by the immediate movement of the fluid material in defined directions and waiting for the slow process of change and fusion of the color. During the drying phase, which can last up to 36 hours, the attention is focused on the chromatic fragmentations and on the evolution of the slowing moving resin’s layers.
The colors meet, influence, complement and contrast each other, spreading within the composition multiple shades and color joints.
Showing the works in a dark environment and illuminated by the Wood light, releases the highest and most vivid tone of color allowing the viewer a vision that goes beyond the boundaries of the size of the canvas. 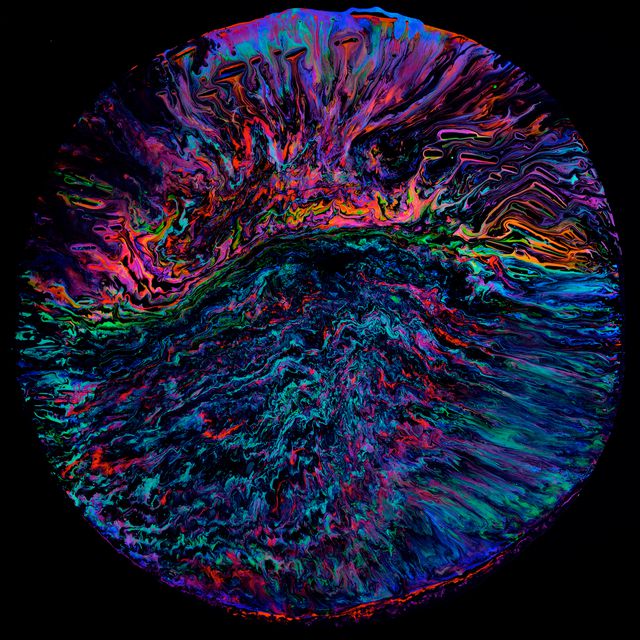 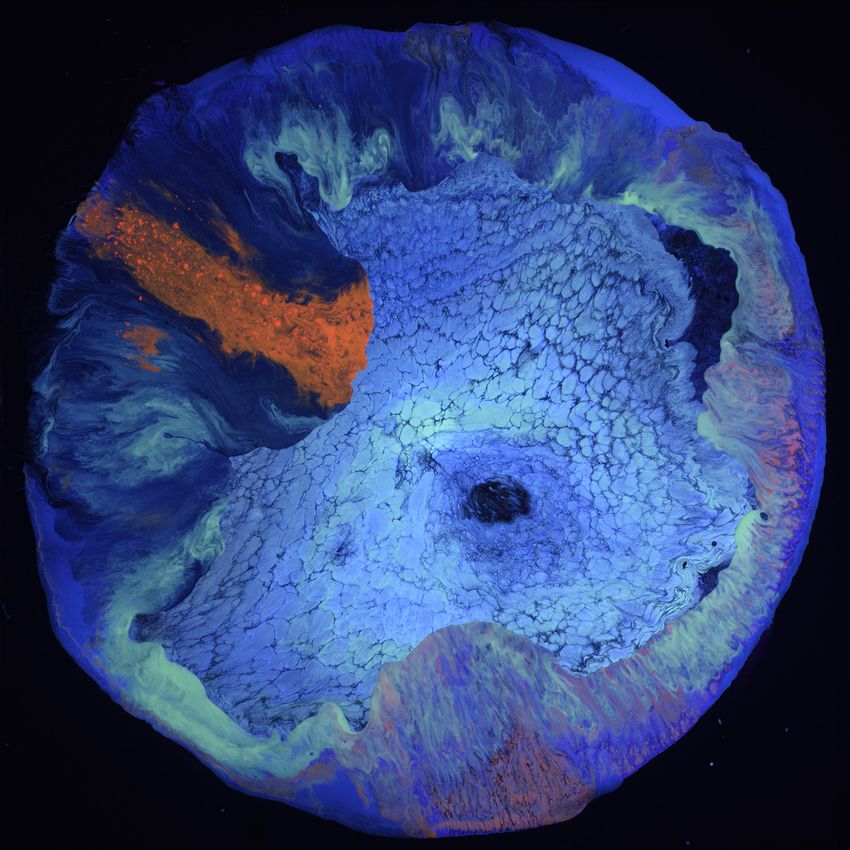 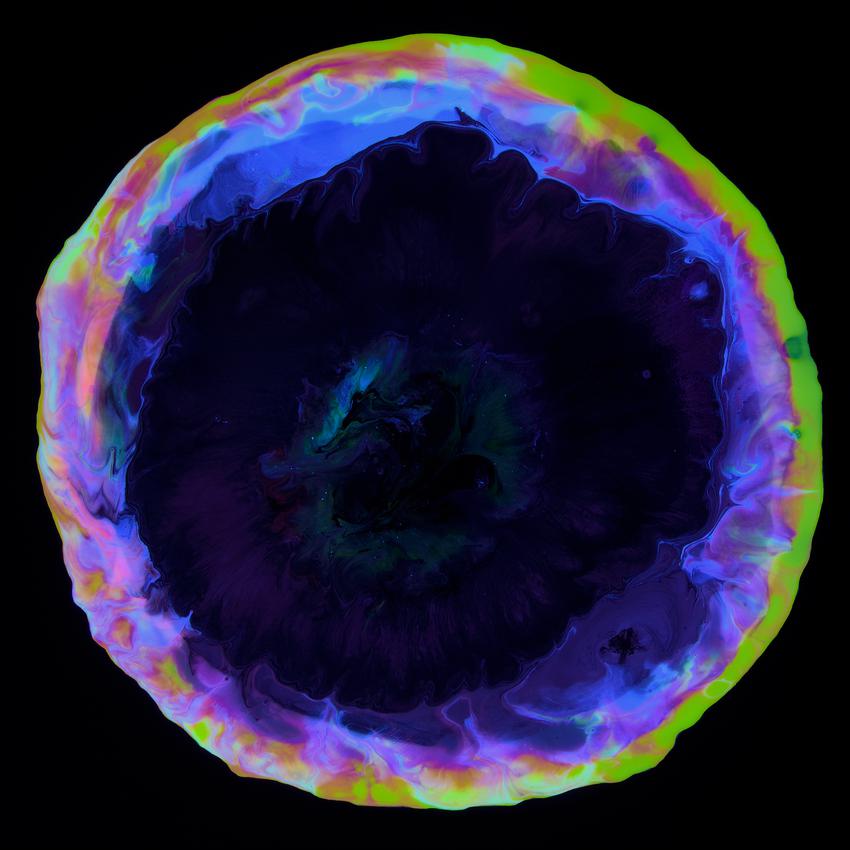 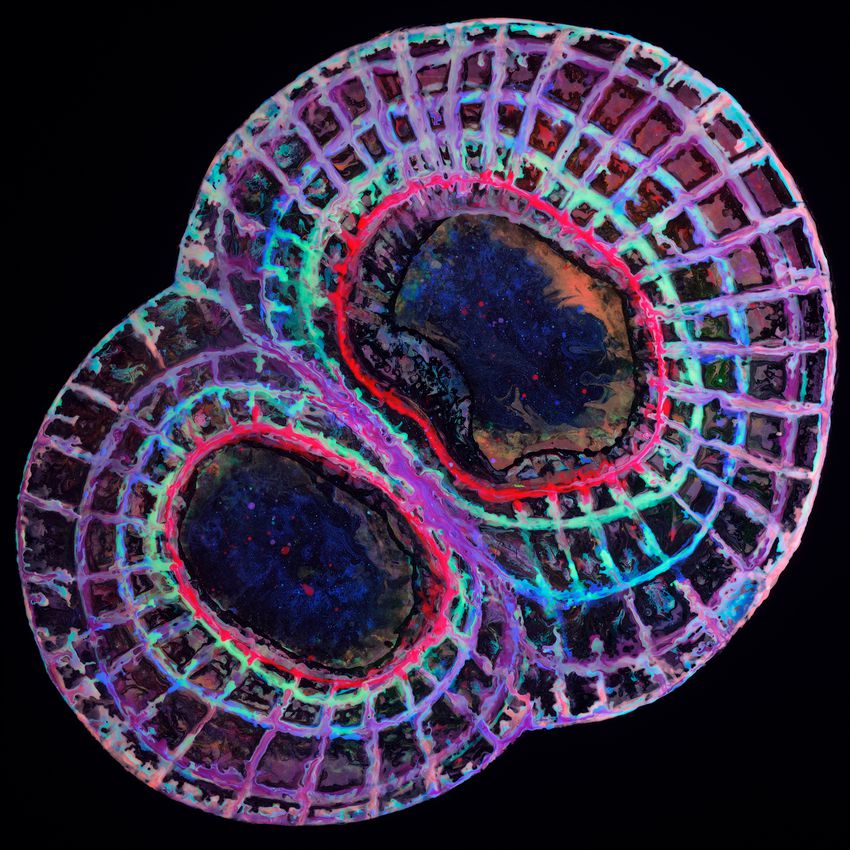